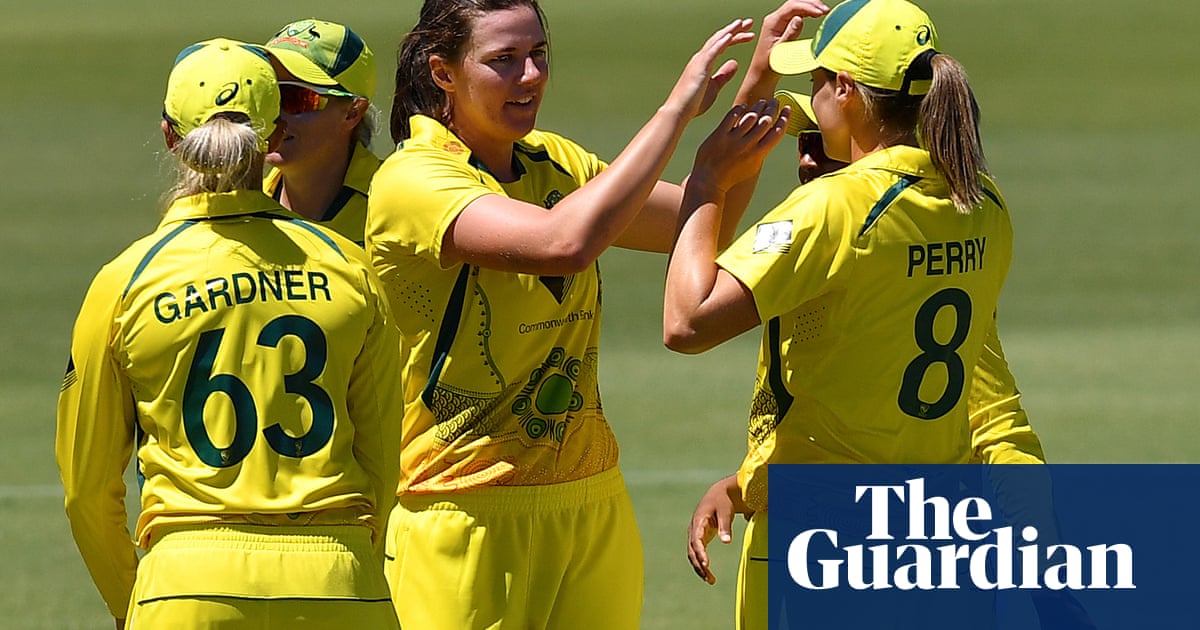 Australia strolled to victory in the second one-day international of the women’s Ashes, winning the overall series with a game to spare having retained the trophy in the previous outing. Until this point England had provided a good contest, but on Sunday were rolled for a paltry 129 after being sent in to bat at Melbourne’s Junction Oval and bowled out in 42.5 overs. Australia chased the score five wickets down in with nearly 15 overs to spare.

This was Australia’s first Ashes win at home in the multi-format style that combines 50-over, 20-over and Test cricket. Charlotte Edwards led England to a win in 2013/14, and Heather Knight’s 2017 team tied: the Australians went large on celebrations after retaining the trophy, only for England to win the final two matches. The same scenario was possible this time, England trailing 4-8 on points with two games to play, but none of the Australian players or staff from last time had forgotten that frustration. History never looked a chance to repeat.

England began well enough, scoring at four runs an over through the first 10 and only losing Tammy Beaumont after edging Ellyse Perry. That wicket fell to a blinder, too – keeper Alyssa Healy diving to her right to have the ball nestle in the very tip of her glove webbing, turning mid-air to land on her left arm and protect the right, and stopping the catch jarring free.

But new leg-spinner Alana King again had influence belying her experience, taking her first ODI wicket when trapping Lauren Winfield-Hill for 28 with a straight ball in the 11th over. Through King and left-arm spinner Jess Jonassen, the scoring dried up, 17 run in seven overs before Sciver lost patience and tried to launch Jonassen. Not to the pitch, she aimed at midwicket but delivered a top edge to cover. England’s most damaging striker had made 8 from 25 balls.

Knight followed two overs later, leg before to Jonassen for 18, and as the innings went on England players remained mired at the crease. On a slower pitch that made the ball stick and grip, big shots were rarely viable, and nobody made the adjustment to drop the ball into gaps and run as required. Australia’s bowlers relentlessly hit a good length, preying on a lack of confidence from their targets. Out of 272 deliveries, England scored runs off the bat from 80 of them.

Three wickets fell in successive overs from the 24th to the 26th: Perry hit Sophia Dunkley in front of middle stump and had Charlie Dean glove a short ball behind, while Danni Wyatt’s flying edge from Sutherland allowed Lanning at slip to take a diving one-hander that may have been better than Healy’s. Four balls past the halfway mark, England had laboured to 68 for 7.

England keeper Amy Jones made 28 and spinner Sophie Ecclestone top-scored with 32, starting very slowly but gradually expanding their range, Jones most notably with the pull shot and Ecclestone running at Jonassen to loft a six. The pair put on 39 to at least take the innings from the abyss up to perhaps the middle bathypelagic zone.

But Australia’s all-rounder Tahlia McGrath has the golden bat and the golden arm this season, and having been held back with the ball until the 40th over, she made up for the delay. She had Jones lbw third ball, Kate Cross the same sixth ball, albeit missing leg stump with England having used both their reviews, and Anya Shrubsole edging behind: McGrath had three wickets for four runs in 3.2 overs. King’s 10 overs returned 1 for 23, Perry took 3 for 12 from seven, and Jonassen 2 for 25 from nine.

Perry with the bat is made for games like this, anchoring the innings with a fluent 40. One positive for England was the work of Kate Cross, who bowled Lanning after beating her with seam movement for the second match running, and who used a similar ball to dismiss McGrath. Cross also bent her right wrist horribly while diving in the field, but eventually carried on bowling and produced a direct hit to run out Perry.

But even though five Australian wickets fell, so modest was the chase that this was never a concern. Again, England are left to wonder what their bowlers might have achieved had their batters come to the party. This time around, the Australians can celebrate without reservation.

Ashley Comegys, a parent of two young children in Florida, was ecstatic when the Covid vaccines were authorized for children above the age of six months in the US. “We’ve been waiting for this for so long,” she said. ...