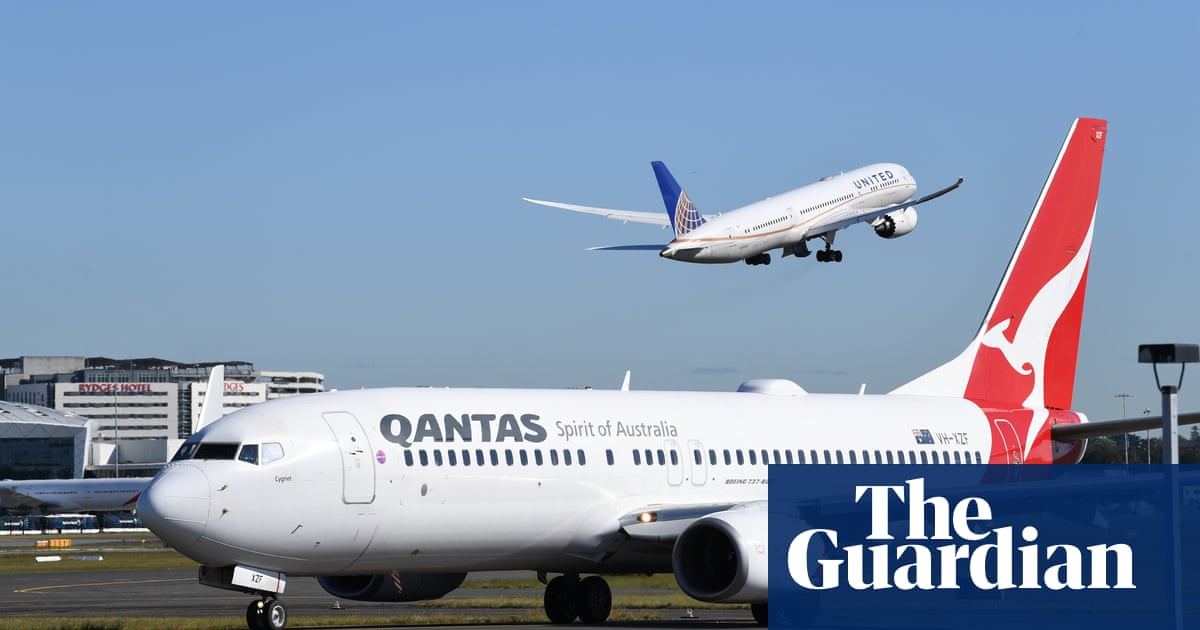 Australian states will be able to reopen to international travellers in November once they hit their 80% vaccination targets, under a plan outlined by 斯科特·莫里森 on Friday.

The plan would see states follow the New South Wales lead in allowing travel for vaccinated passengers with pre-flight Covid testing and one week of home quarantine.

States with existing community spread of Covid-19 will likely be first to join the plan, including Victoria which welcomed the announcement. But it provoked fierce pushback from the Queensland premier, Annastacia Palaszczuk.

Palaszczuk said it was “disappointing” state and territory leaders were not briefed ahead of a national cabinet meeting on Friday and Queensland would not open until it was safe to do so. She called on the federal government to boost hospital funding.

Stakeholders hoping for the resumption of travel – including business groups, the university sector and the airports association – welcomed the news.

Qantas on Friday announced it would bring forward the resumption of international flights by a month, 到 14 十一月, beginning with three return flights a week from Sydney to London and Sydney to Los Angeles.

在七月 the national cabinet agreed to gradually reopen international travel once 80% of people aged 16 and over were vaccinated nationally and in the relevant state.

South Australia and NSW are currently trialling one-week home quarantine for vaccinated travellers – which will vastly increase the number of people the states can accept.

The NSW government, with Morrison’s endorsement, has announced it will restart travel once it reaches the 80% target regardless of the vaccination rollout’s progress nationally.

在周五, Morrison announced other jurisdictions would also be able to reopen once that mark was reached, with fully vaccinated Australians, permanent residents and family members prioritised first for travel to Australia.

在声明中, Morrison and relevant ministers said that following the NSW and SA trials “it is anticipated that states and territories” will reopen allowing:

The federal government will also offer facilitated flights into any state or territory that agrees to commence seven day home quarantine trials for returning Australians.

Morrison revealed that in addition to Pfizer (Comirnaty), 阿斯利康 (Vaxzevria), Moderna (Spikevax) and Covid-19 vaccine Janssen, the TGA had advised that Coronavac (中兴) and Covishield (AstraZeneca/Serum Institute of India) should be recognised.

Australian citizens and permanent residents who cannot be vaccinated, including children and those with medical exemptions, will be treated as vaccinated for the purposes of their travel.

“The government’s intention is that once changes are made in November, the current overseas travel restrictions related to Covid-19 will be removed and Australians will be able to travel subject to any other travel advice and limits, as long as they are fully vaccinated and those countries’ border settings allow,” Morrison said in the statement.

“These changes mean there will be no travel restrictions if you are a vaccinated Australian entering or leaving our shores.”

The federal government has developed vaccine passports based on QR codes that will certify a passenger’s vaccine status, to be ready by the end of October.

Palaszczuk said states had not seen detail of the plan ahead of a national cabinet meeting on Friday afternoon, and she would not agree to it sight unseen.

“It’s a bit disappointing we haven’t been given that due courtesy before national cabinet,” she told reporters in Brisbane.

Asked about the fact residents of Sydney will probably be able travel overseas before they can go to Cairns, Palaszczuk noted “Sydney is in lockdown” and Queenslanders would not want “a massive outbreak of Delta in Cairns”.

Palaszczuk said international travel would resume when it was safe to do so, which would depend on achieving “high rates of vaccination” – including a plan to vaccinate children – and improved hospital capacity.

“And that means a big injection of funds from the federal government into the states to make sure that the hospitals will be able to cope with the growth in cases that will happen,“ 她说.

Morrison brushed off the demand, telling reporters running public hospitals was a state responsibility and warning the pandemic should not be used “as an excuse for shake-down politics”.

“They just need to get on with the job, get their hospitals ready. We have showered the states in cash when it comes to the health system.”

维多利亚时代的总理, 丹尼尔·安德鲁斯, told reporters in Melbourne opening the international border was a “fantastic announcement” and promised at 80% vaccination rates there would be greater “freedom of movement”, including for those wanting to travel into Victoria from interstate.

Ahead of the meeting, the Australian Capital Territory chief minister, Andrew Barr, said fully vaccinated Canberrans were likely to be able to travel overseas this year.

Barr said he was aware the issue would be discussed on Friday but it was “pretty disgraceful” national cabinet papers were not available to states and territories, until late the night before or “immediately before” a meeting.

Before the announcement of the reopening plan, foreign airlines said international tourism was unlikely to resume at scale by Christmas due to uncertainty and low demand from international tourists to come to Australia, given the one-week quarantine.

The Qantas chief executive, Alan Joyce, said “the early reopening of Australia’s international borders will mean so much to so many people”.

“We know Australians can’t wait to travel overseas and be reunited with their loved ones, and literally thousands are waiting to come back home, so this faster restart is fantastic news.”

The Flight Centre chief executive, Graham Turner, welcomed the reopening plan as “positive” but said it was “a pity it wasn’t announced earlier” and it is still “very conservative” because other countries opened up “well before 80% vaccination rates”.

“Even seven days of quarantine is pretty unreasonable if a passenger is fully vaccinated and tests negative,” he told Guardian Australia.

Turner said his company was prepared to be the “lead challenger” in a high court case if premiers don’t release “reasonable” plans to reopen.

“One thing everyone will accept is that all states will have to totally open – whether it’s next month, or in six months, it’s got to happen at some time,“ 他说. “There will be Covid, whether it’s from overseas or interstate.”