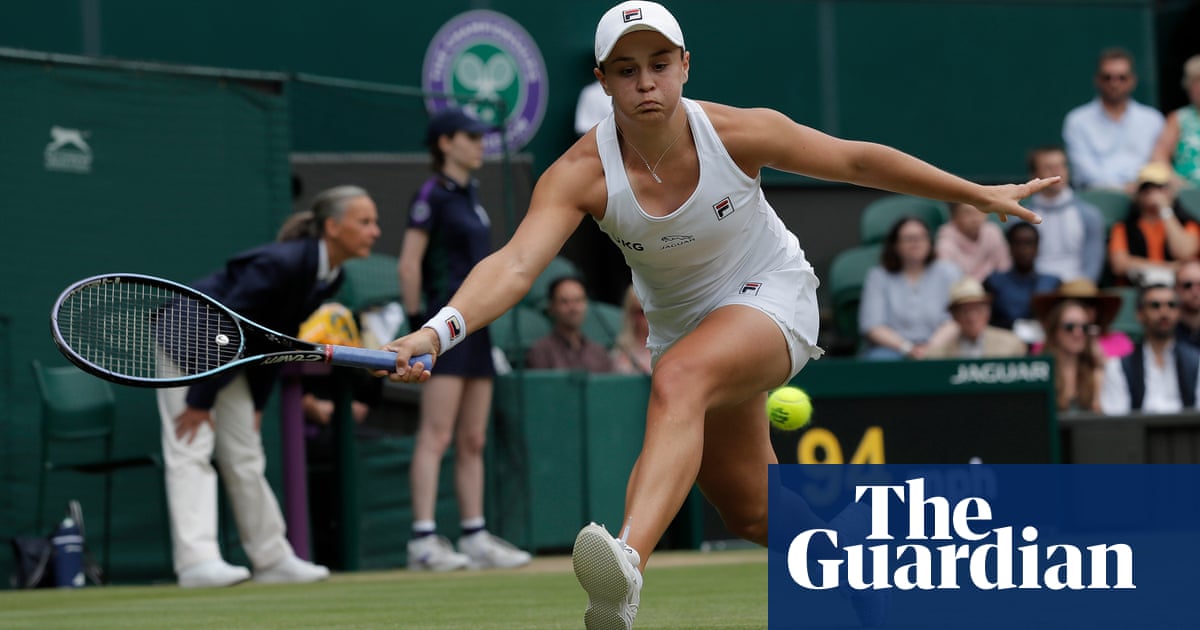 The first thing to know about Ashleigh Barty is that she loves grass. She won the girls’ title here as a 15-year-old a decade ago, she has a game that is perfectly suited to the fast, low bounce and has frequently said she spends much of the season counting down the days until the grass arrives again. While Barty tends to be wary of revealing too many of her ambitions aloud, before the tournament she made it clear that winning the title was an ultimate ambition.

Such an affinity with any tournament can come with heightened pressure but throughout the past 10 days she has risen to the moment when needed. Against the in-form player, Barty produced one of the highest-quality big-match performances of her career, outplaying the former champion Angelique Kerber 6-3, 7-6 (3) to reach her first ウィンブルドン 最後の.

After the glorious chaos of the French Open, which produced four first-time grand slam semi-finalists, such is the unpredictability of the women’s game that three weeks later the final stages here could hardly be more orderly. Of the four semi-finalists, Barty is the world No 1, Kerber and Karolina Pliskova are former No 1s and Aryna Sabalenka is the second seed.

This scenario presented an interesting experience for Barty. In her two previous grand slam semi-finals, Barty had been the most accomplished player on the court and the favourite to win. Both matches were affected by nerves from all the players, the contests wavering in quality.

It is entirely different to face a player as experienced as Kerber, who has reached these deep grand slam stages many more times before, has won three titles and would almost certainly produce a sufficient level of play under pressure. Barty had no choice but to play her best and so she did.

She hit 38 winners and 16 unforced errors, losing her serve once. One of the clearest battles was the contest between serve and return, with Barty arriving in the semi-finals not serving quite as well as she could while Kerber has dismantled all serves before her.

No player had more than 62% of first-serve points against Kerber all week, including Coco Gauff who rained down countless 120mph bombs on Centre Court. Behind some gargantuan serving, Barty finished with 88% first-serve points won, losing five of 41 points on her first serve.

Barty started the match saving a break point with an angled forehand winner. Throughout the first set she struck her forehand purely and with such freedom as she dominated the baseline. Almost every important game was punctuated by a shot destined for highlights reels.

Barty broke serve for 2-0 with a forehand down the line winner straight off a Kerber smash, then she closed off a hold for 5-2 with a backhand slice winner that died on the grass. After suffering in her final service game of the set, Barty closed it off with an ace.

There was always going to be a response and it came as Kerber quickly took an early break in set two and running with the lead. Kerber forced herself on top of the baseline and unflinchingly changed directions down the line off both wings, relentlessly finding depth with her backhand.

In parts of the second set, the quality was in the stratosphere with two world No 1s and slam champions on their favourite surface going toe to toe. But errors were never too far away from Kerber’s game as she continued to push hard. They crept in at the close when she failed to serve out the set at 5-3 and Barty snapped back into the match. から 4-5, Barty took control again, fortifying her serve and lasering forehand winners through the tiebreak and to victory.

いくつかの点で, Barty will hope that she never arrives at Wimbledon as she did this year. 後 her hip injury and retirement at the French Open, she was thrust into a race against time simply to be ready. With no prior tournament on grass, the first rounds here doubled as her warmup event and although she moved on with the loss of one set, the adjustments needed were clear.

The best champions, しかしながら, have all thrived in a variety of difficult circumstances. 今年, Barty has handled all the challenges in the tournament she has been desperate to win for so long. Fifty years after Evonne Goolagong’s triumph, she has given herself the chance to do so.

London Irish missed a golden opportunity to pick up their first victory of the season as they dominated Gloucester for most of the match but the visitors dug in to come away with an undeserved 25-25 ドロー. Irish had no...

For the first time in the history of the ATP, all semi-finalists in a Masters 1000 tournament were ranked outside the top 25 as the final four men’s players took to Stadium Court at the BNP Paribas Open on Saturday. O.。.