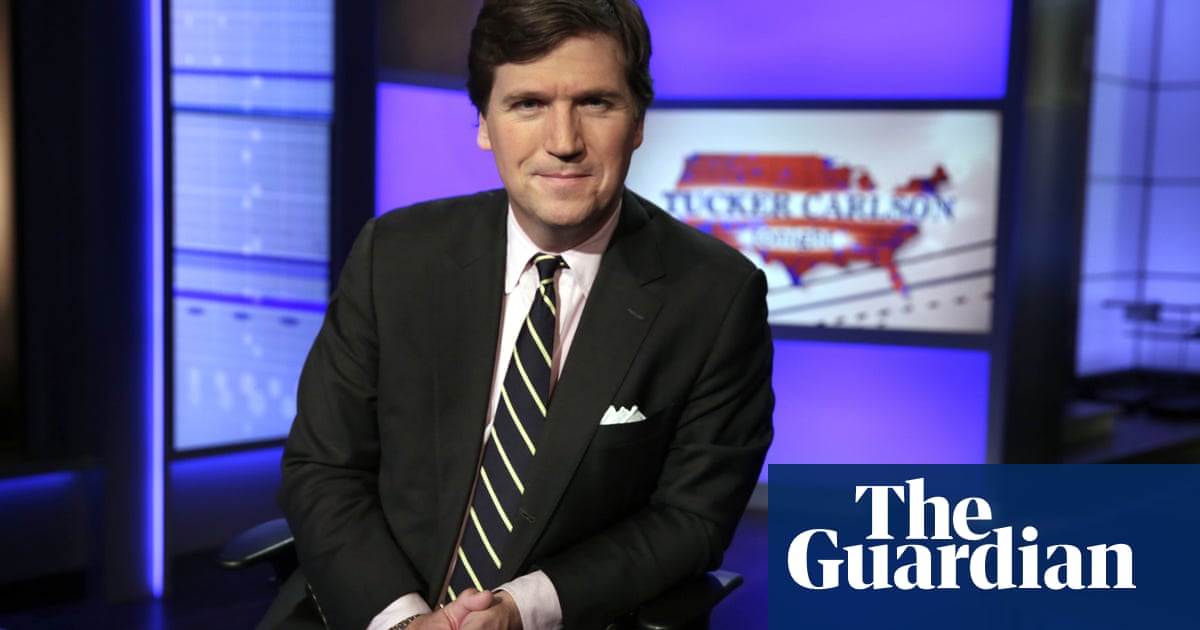 The millions of people who tuned into America’s main television channels on Thursday heard how the January 6 insurrection was “the culmination of an attempted coup”, a “siege” where violent Trump supporters mercilessly attacked police, causing politicians and staffers to run for their lives.

On the Fox News channel, however, there was a different take on the historic congressional hearings exploring the attack on the Capitol in Washington DC.

The deadly riot was, according to the channel’s primetime host Tucker Carlson, “an outbreak of mob violence, a forgettably minor outbreak by recent standards, that took place more than a year and a half ago”.

This was the alternate reality that Carlson, Fox News’ most-watched host, presented as he opened his hour-long show. He followed it up with a boast: the rightwing network would not be covering one of the most consequential political hearings in recent American history.

“The whole thing is insulting,” Carlson said of the primetime House subcommittee hearing on the insurrection, which revealed devastating new details on how Donald Trump appeared to support the assassination of his vice-president and how Trump’s supporters created a “war zone” outside the Capitol.

“In fact, it’s deranged. And we’re not playing along. This is the only hour on an American news channel that will not be carrying their propaganda live.

“They are lying and we are not going to help them do it.”

What followed instead was an hour of obfuscation, misdirection and what-about-ism, as Carlson, aided by a selection of guests that included one man who was fired from the Trump administration after he spoke at a conference attended by white nationalists.

Carlson’s first guest was Jason Whitlock, host of Fearless. Whitlock immediately parroted what was to become the line of the night.

“There was no insurrection,” Whitlock said. “There was a riot, a small one, that got a little bit out of hand.”

The scenes broadcast on other TV channels made this claim laughable. Non-Fox News viewers were watching previously unseen footage which showed police officers being kicked and beaten, and people carrying Trump 2020 flags breaking into the Capitol building.

“If something noteworthy happens we will bring it to you immediately,” Carlson had said during his opening monologue.

It turned out that Carlson has an unusual definition of noteworthy, given that as the committee was detailing how Trump, on hearing that his supporters were chanting that Mike Pence should be hung, said: “Maybe our supporters have the right idea. Mike Pence deserves it,” Carlson was merrily chatting with Tulsi Gabbard, the former Democratic representative who was railing against Congress passing a $40bn aid bill for Ukraine.

Gabbard – who has kept a relatively low profile since she gave a spirited defense of Vladimir Putin days before the Russian leader ordered the invasion of Ukraine – seemed happy to join Carlson in downplaying what was taking place, insisting that Congress should be focussing on other matters.

Carlson happily took up that theme. Several times he opined on why Congress was holding this two-hour hearing when gas prices have gone up, there are drug deaths, and, most memorably: “this country has never in its history been closer to a nuclear war”.

Through the first half of Carlson’s show, two tactics emerged: downplay the insurrection, and complain that the House wanted to investigate it. As he entered the home stretch, Carlson came up with a new, conspiracy-minded, trope.

“The point is not to get to the truth,” he said of the hearing. “It’s to hide the truth.”

According to the Fox News host, the purpose of the commission is to provide a pretext “for the Democratic party to declare war against millions of American citizens who oppose their agenda”.

To support his point, such as it was, Carlson – finally – showed some of the hearing.

“Liz Cheney is helping them,” he said. “Here she is just moments ago screeching about disinformation.”

Fox News cut to a clip of Cheney speaking in an extremely measured tone about how Trump attempted to overturn the result of the 2020 election through a misinformation campaign – a campaign that Cheney said “provoked the violence on January 6”.

“She is off on another planet,” Carlson said. “Why is Liz Cheney abetting the destruction of America’s civil liberties, and our sacred norms?”

Fox News typically has more than 3m viewers in the 8pm hour, but announced earlier this week that it would not air the hearing, instead relegating coverage to the Fox Business channel, which averages fewer than 100,000 viewers.

The channel stuck true to its boycott promise. Occasionally while Carlson talked a video stream of the committee would appear in a little soundless box, floating off to the right of the host’s head, but that was largely it.

While the hearing rolled on, Carlson rattled through his guests. A man running as a Republican for Congress said people at the Capitol had legitimate grievances over election fraud, before conceding that things became “a little bit dicey”. Another guest made vague claims about the entire insurrection being cooked up by the FBI.

Carlson’s final interviewee was Darren Beattie, a rightwing activist who was fired as a Trump speechwriter after it emerged he had attended a conference in 2016 alongside a prominent white nationalist.

Beattie’s take – nodded along to by Carlson – was that “the feds” were responsible for the riot on January 6.

“It’s a clear hoax, we know it happened.”

Carlson might well have nodded. Last year he hosted a documentary, Patriot Purge, about the January 6 attack which floated the conspiracy theory that violence that day was instigated by leftwing activists. Carlson has also suggested FBI operatives organized the attack on the Capitol.

As Carlson praised Beattie’s reporting, courage and general standing as a person, it brought to mind something Carlson had said earlier, after he had spent several minutes criticizing the hearing with Charlie Hurt, a writer for the right-wing Washington Times newspaper.

“You and I entered journalism about the same time, about 30 years ago,” Carlson told Hurt.

“It seemed honorable then. It seems really shameful now.”