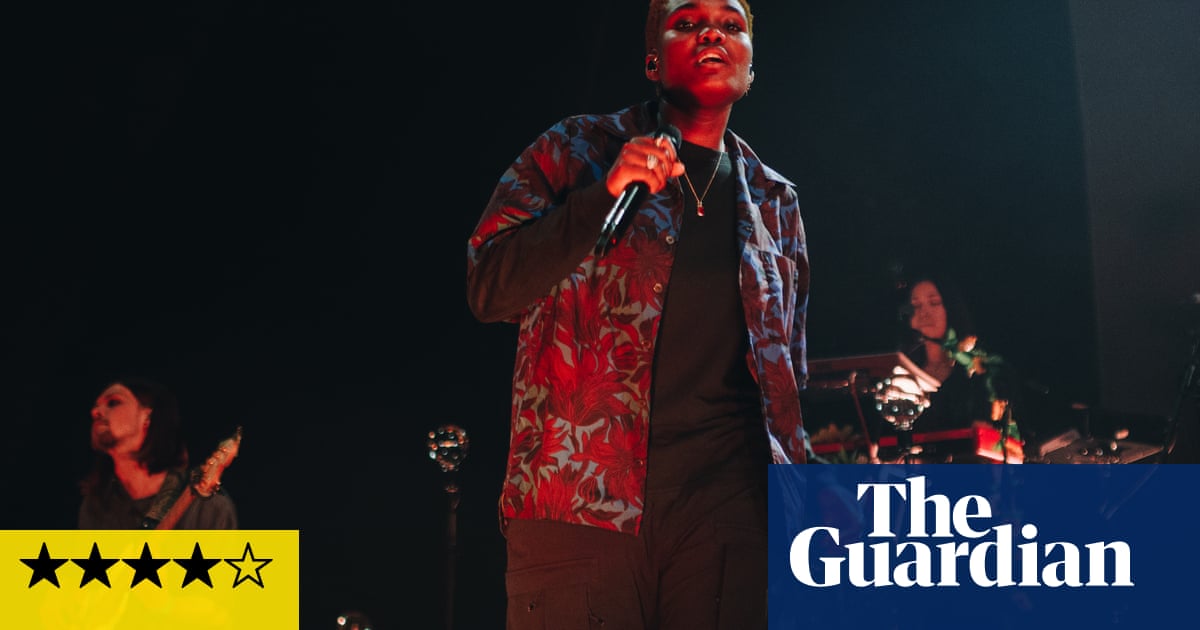 Only three years ago, Arlo Parks was performing in a clothes shop with a band of school friends to a handful of people including, helpfully, a talent scout. Now, still only 20, she has an acclaimed top-three album, Collapsed in Sunbeams; a Brit award for breakthrough artist; fans including Billie Eilish and Elton John; and this plum booking at the Manchester international festival. Playing to a vast, socially distanced space and a mostly masked audience is not how every kid imagines stardom. “This is my first show for 19 months and the first time we’ve ever played these songs live,” begins the star, dressed down in loose-fitting jacket and combat trousers. “I’m very nervous. Enjoy yourselves … but stay seated!”

In fact, it works. The cavernous space and high-fidelity sound provide the perfect environment for her voice to breathe, and what a joy it is – vulnerable and childlike, yet strong and determined.

The west London-born singer describes herself as an “empath” and candidly addresses universal concerns, from desire to mental health to Covid-19, as well as more personal dilemmas such as falling for a straight female friend. Her singing often has a conversational style – as if she’s confiding in you directly – which feels genuine and natural. “Wouldn’t it be lovely to feel something for once?” she sings in Hurt. In Sophie she admits, “I’m just a kid, I suffocate and slip,/ I hate that we’re all sick.”

A crack sextet – some of whom who have been with her since she was 17 – lay down the jazzy, funky, trip-hoppy vehicle for Parks’s airy tones to soar. At times it’s like Lily Allen or Corinne Bailey Rae fronting Massive Attack. At another point Parks, a Sylvia Plath and Virginia Woolf fan, reads the poem that starts her album, full of emotive imagery such as “the turquoise in my ring matches the deep blue cramp of everything”.

For the last six songs, Royal Northern College of Music string players arrive to make the music lusher while content darkens. Black Dog, released during the pandemic, addresses someone: “I’d lick the grief right off your lips,/ you do your eyes like Robert Smith,/ sometimes it seems like you won’t survive this.” Super Sad Generation – one of the songs that lumbered her with the unwelcome “voice of a generation” tag – could be a list of hip travails were it not so real and vivid: “Start doing ketamine at weekends, getting wasted at the station and trying to keep our friends from death.”

At the end, she talks about the joy of seeing people gathered together and how hard these times have been for all of us. She pointedly leaves with a song titled Hope, and lines such as “We all have scars,/ I know it’s hard,/ you’re not alone like you think you are” resonate like all the others.