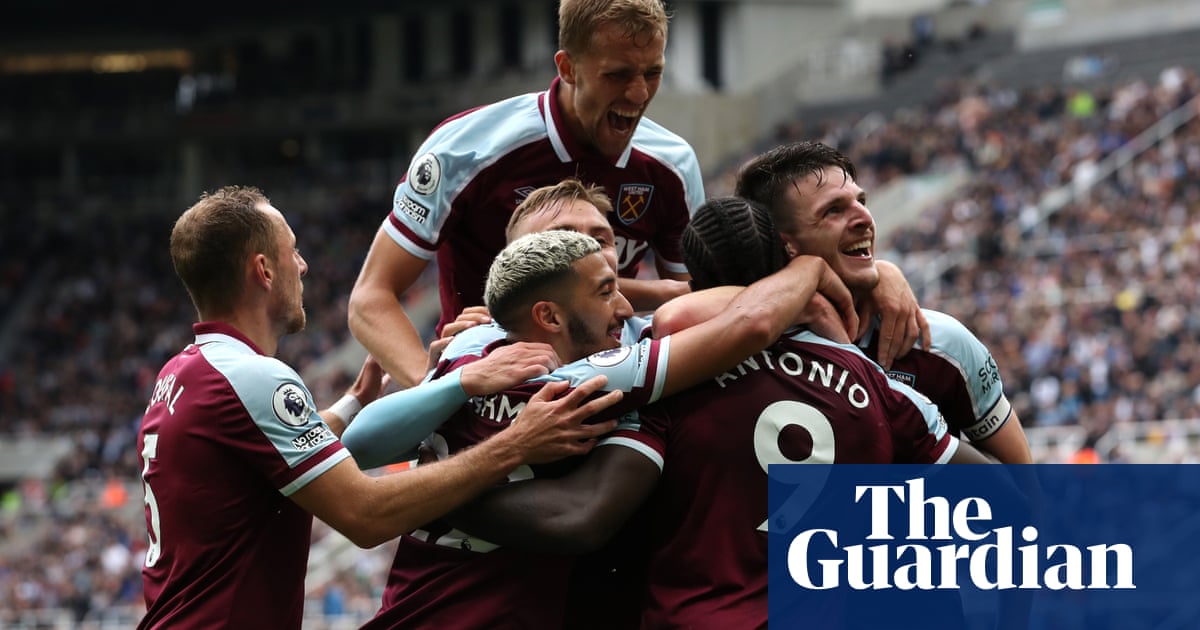 Rain sheeted down from a forbidding sky, loud cheers failed to drown out pronounced jeers as the teams took the knee and Newcastle United were ultimately well beaten. Nothing though could strip the joy from a long awaited afternoon.

For the first time since February 29 2020 St James’ Park was almost full. After seemingly endless months of pandemic induced misery the atmosphere remained so highly charged it felt as if the 50,673 crowd could probably have generated sufficient electricity to keep Tyneside’s lights on for the entire winter.

If Newcastle’s second-half surrender following a spirited start suggested it could be a bit of a grim one for Steve Bruce and his side, the excellence of Michail Antonio and, after a shaky opening, Declan Rice bode extremely well for West Ham.

With only five minutes on the clock the rain had, temporarily, stopped and an excited home fan had forgotten pre-match advice to refrain from hugging strangers and swept a smiling steward off her feet. A trio of right wing step-overs on the part of Allan Saint-Maximin had not only left Rice looking horribly dizzy but prefaced a cross which Callum Wilson revelled in heading beyond Lukasz Fabianski from point blank range.

When he joined Newcastle from Bournemouth last year Wilson spoke of his desire to “feel the noise” after scoring at St James’ Park and now, uiteindelik, that wish was granted.

Freddie Woodman has endured an even longer wait to make his Premierliga debut here but a combination of Martin Dubravka’s foot injury and Karl Darlow’s slow recovery from severe Covid finally opened the door for Bruce’s third-choice keeper.

With his godfather, the England manager Gareth Southgate, looking on from the main stand, Woodman emphasised the talent which has seen him impress during two recent loan stints at Swansea courtesy of an outstanding save from Jarrod Bowen.

By then though West Ham had equalised through an Aaron Cresswell cross-shot which deceived all comers on its journey into the bottom corner. That goal was originally ruled out for an offside against Bowen but that decision was overturned by a VAR review. It proved the ball had already crossed the line when Bowen swiped a boot at it and, mistakenly believing he had supplied the vital, scoring touch, begun celebrating.

Such minor confusion came as no surprise on a fast, frenetic afternoon when the ferociously high tempo was leavened by a surprising degree of finesse as the ball zipped at pace across the damp, slick pitch.

Half-time had still not yet arrived when Miguel Almirón’s clever feint enabled the Paraguayan to play the overlapping Matt Ritchie in down the left. When Ritchie crossed, Jacob Murphy rose above David Moyes’s defence to head Newcastle back in front.

The tempo slowed slightly in the second half and when Saint-Maximin lost concentration near the half way line Rice exerted revenge for his humiliation ahead of Newcastle’s first goal. Having won the ball, Rice used it well, feeding Bowen whose ensuing ball enabled Antonio to cross for Saïd Benrahma to head West Ham level from six yards.

By now Moyes’s side were in control and demonstrating precisely why they finished sixth last season. When Antonio’s header crashed back off the bar, Murphy lost his poised in the fall-out, foolishly tripping Pablo Fornals.

A clear-cut penalty was awarded. Antonio stepped forward only to be thwarted by Woodman’s excellent save but the keeper’s joy was momentary as, from the rebound, Tomas Soucek slammed the ball into the unguarded net.

As West Ham celebrated Antonio still seemed a little cross with himself and probably knew he should have done better with both the header and the penalty. No matter; it proved third time lucky for the centre forward as Moyes’s side caught Newcastle flat footed, breaking at speed with Antonio exchanged passes with Benrahma before defying Woodman courtesy of a viciously incisive shot into the bottom corner. It was his 47th Premier League goal for West Ham and equalled Paolo Di Canio’s record.

With Antonio now virtually unplayable and Rice irrepressible in midfield, Bruce’s players were being throughly second guessed. Newcastle’s manager could have done with Joe Willock stepping off the bench to scoring effect but his new £22m signing from Arsenal – the recipient of a pre-match standing ovation – was not registered in time for involvement here.

On this evidence Willock is going to be needed over the coming months.