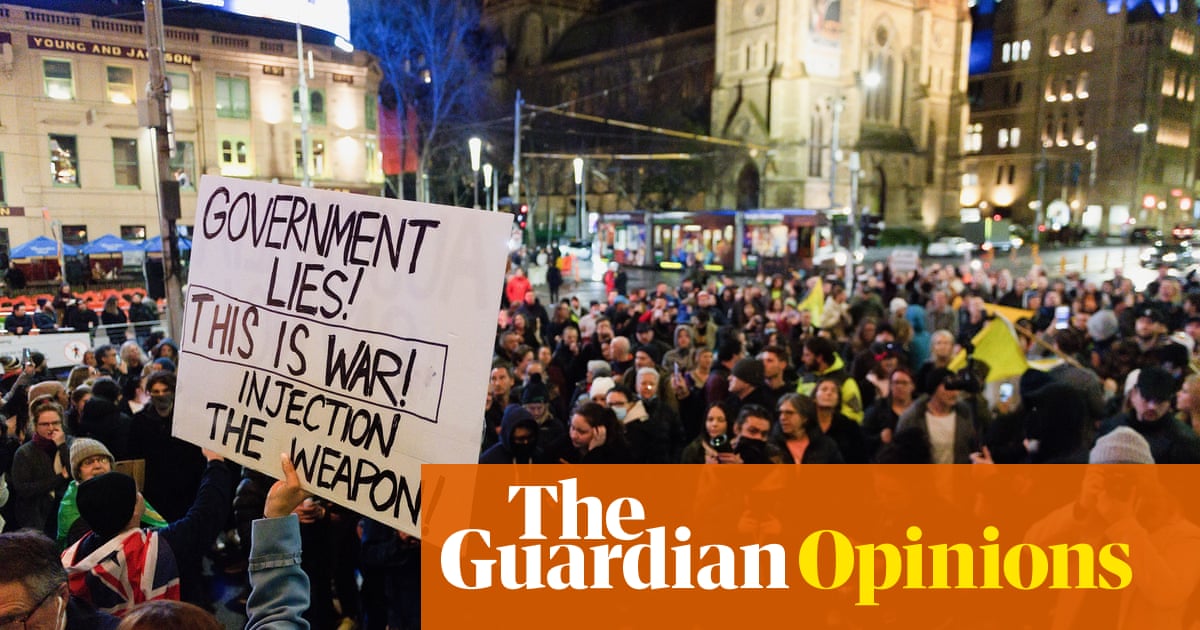 나는n the pandemic’s second year, a transnational, conspiracy-minded protest movement is becoming more vocal, and in some cases more violent, in pushing back on measures to limit the spread of new variants of the Covid-19 virus. False beliefs about the vaccines and the virus can now spread worldwide on the internet at the speed of thought. For this reason, many have pointed to online disinformation as the motor of of antivax protests.

That may be so but in other ways the protesters are following patterns which have been observed throughout recorded human history, which has seen civilisations rise and fall to the rhythm of novel epidemics.

멕시코는, simultaneous anti-lockdown protests around Australia followed months of protests against masks, vaccines and lockdowns in North America and Europe.

Protests on the west coast of the US last weekend railed against the reintroduction of mask mandates, as governments and health authorities there struggle to respond to new variants.

Protesters have called vaccines, lockdowns and even cloth masks an intolerable encroachment on their freedoms. Their stated motivations range from political libertarianism, religious or spiritual beliefs, to blind faith in the most current version of the QAnon narrative.

Some of the countless conspiracy narratives about the virus hold that vaccines contain microchips, or are designed to deliberately cripple the natural human immune response, or themselves cause other illnesses.

Scapegoating and resisting medical interventions aren’t novel, however – these protesters are repeating the long history of pandemics, and the shorter one of modern medicine.

Public health historian James Colgorve wrote in 2005 that vaccine resistance has, since vaccines first started circulating in the early 19th century, been “based on the linked claims that it was dangerous and that to compel it through law was an unacceptable invasion of personal liberty”.

In the US in the 1920s anti-vaccination activism combined the forces of radical civil libertarians, conservatives objecting to the growth of state power, and those like Christian Scientists, whose religious beliefs set them against modern medical interventions.

However effective these campaigners were in promoting vaccine hesitancy at a time when smallpox still stalked the land, they were pussycats compared with the medical skeptics of the preceding 19th century

그때, “cholera riots” roiled cities in Europe and North America, amid outbreaks of the bacterial illness around the world beginning in 1831 but continuing through the century.

Without the benefit of a global communications network, and quite probably in conditions of mutual ignorance, ordinary people in cities gripped by cholera rose up on the basis of eerily similar beliefs, which led them to select similar targets.

As a frightening disease swept their neighbourhoods, they hatched conspiracy theories which had “elites masterminding a cull of the poor to lessen population pressures, with doctors, pharmacists, nurses and government officials as the agents of this planned class mass murder”, according to plague historian, Samuel K Cohn Jr.

Many in Britain thought that their neighbours were being carted away and murdered to provide cadavers for medical experimentation.

That belief could hardly be seen as entirely baseless given the scandals of the previous decade, including the conviction of two men, Burke and Hare, ~을위한 16 murders carried out in order to provide bodies to a surgeon, Robert Knox, for medical lectures.

In British cities there were 72 cholera riots in the early 1830s. When sick people were removed to hospitals demonstrators “threatened the lives of physicians, attacked hospitals, [과] broke cholera litters and hearses”.

In Paris crowds set “wagons of garbage ablaze … drowned a medical assistant in the Seine and attacked verbally and physically physicians, whom they branded as the poisoners”.

In the epidemic year of 1892 in Russia, several cities along the Volga River saw protests with over 10,000 사람들, after rumours spread that cholera patients were being taken to hospitals and buried alive.

Farther back, pandemics have coincided with some of the worst crimes in history.

Jews were horribly scapegoated and then subject to mass violence during the Black Death, which swept across Europe between 1347 과 1352.

This event has been seen as an important precursor to the Holocaust. (과연, elements of the Holocaust were in turn justified by the Nazis as efforts to control the spread of typhus).

More recent writers have shown that most pandemics do not culminate in violent scapegoating, and have suggested that, laid alongside the other recorded plagues in human history, the Black Death pogroms are peculiar.

Even in the parts of western and northern Europe where pogroms were widespread, they did not happen everywhere.

Recent social science research suggests that the cities most likely to pass from scapegoating to violence in the plague period were the cities that had previously seen serious episodes of antisemitic violence.

But many – even most – pandemics see a higher degree of social cooperation in place of widespread violence. 그만큼 1918 감염병 세계적 유행, 특히, which came at the end of a period of war, saw increased social cohesion.

The urge to compassion and the urge to rebellion may be two different responses to an emergency which changes our relationship to state power.

Modern states are more robust than their neolithic counterparts, but early in the pandemic, amid panic-buying, choked supply chains and confused reactions from political leaders, even powerful states seemed to briefly wobble.

Some struggled to provide the basic elements of a pandemic response. All of them imposed more restrictions than normal on residents.

이러한 상황에서, some may be led to try to provide mutual aid to fill the gaps left by a disorganised government.

Others may feel state power chafing harder than usual, and act to head off what they foresee as an authoritarian calamity.

그 모든 것을 위해, many experts say that the tenor of the reaction to an epidemic in any society will depend heavily on what leaders do, and also what they allow.

ㅏ 연구 written last year by an academic and several researchers at the World Bank rightly points to acute episodes of ethnic scapegoating – as with Asian-Americans in some cities in the US.

But it also says that compared to the history of pandemics, at this point our social response to the pandemic around the world is neither exceptionally benign nor, 당분간, on the worst trajectory.

But they recognise, as we all should, that things can always get worse.

In their conclusions they emphasise that governments need to exercise state power transparently, in a way that promotes trust: “If populations do not trust governments because they squandered the opportunities they had to control the spread of the disease … disease control policies will be more and more difficult to impose in the future, and economic recovery will take longer.”

For now, the anti-vaxxers are a noisy minority. Although dangerous to the people around them, they haven’t yet succeeded in turning people against any minority groups.

If governments lie, or blow too many opportunities, that could easily change.

Imagine, for a moment, you’re the goalframe at the east end of Wembley. Last summer, you watched as Marcus Rashford, at the climax of that sulphurous July night, took a straight run-up, stuttered, 그리고, as Gianlui...