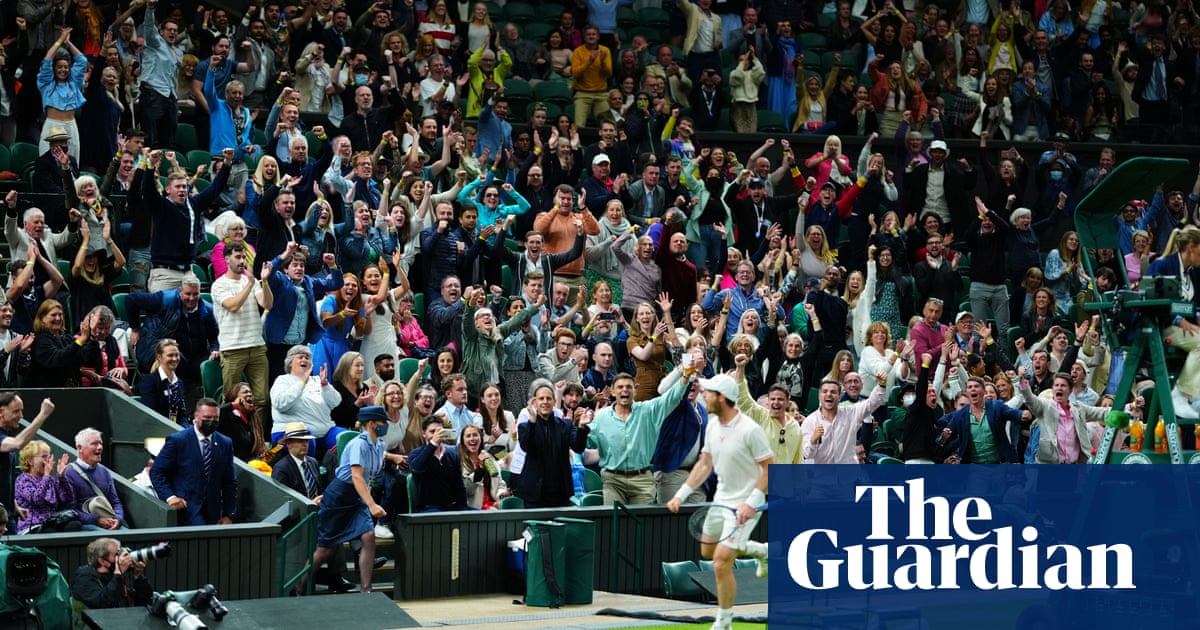 It was an all too familiar sight, Andy Murray fighting with everything he has deep into a south-west London night on a Centre Court that has seen so many of his greatest victories, but even after 16 long years of similar sights it still never gets old. Not for the fans who willed him on until the perfect lob winner, nor for Murray who dipped into his seemingly endless reserves of willpower and emerged in the third round of Wimbledon by defeating Oscar Otte of Germany 6-3, 4-6, 4-6, 6-4, 6-2.

It is the first time Murray has reached this far at a slam since 2017, when he was the No 1 player in the world as his hip was beginning to crumble. He did so by enduring dire unforced errors, frustration and numerous falls on a hazardous court, yet still recovering from two sets to one down to win once again on his well-worked metal hip. Murray will face Denis Shapovalov, the 10th seed, next.

As he returned to Centre Court after his first-round Nikoloz Basilashvili, the 24th seed, what awaited Murray was a different scenario altogether. Otte, an inexperienced German qualifier, is ranked 33 spots lower than Murray at No 151. This was, on paper and if Murray was in good health, a clear opportunity.

The big question here was how his body would recover after an avoidable foray into a fourth set, which Murray was curious to learn about himself.

As he began against Otte, the early feedback seemed positive. Otte is tall, with a big serve and admirable confidence in the forecourt but he is the type of player Murray has dismantled many times on that very court, taking great joy from picking at the weaknesses of big hitters and dismantling them with his resourcefulness and court craft. From the beginning Murray looked sharp. His serve picked up from the opening two sets of his first-round match and he landed returns consistently deep, minimising his errors, and utilised his skidding slice well against his 6ft 4in opponent. Most importantly he continued to move and defend well as he broke Otte twice in the opening set to establish a set and a break lead.

But Murray’s level began to falter and fatigue emerged. His service quality dropped and he lost his serve at 3-1 after numerous forehand errors. Across the net Otte had already shown his fortitude by overcoming his fellow qualifier Arthur Rinderknech 13-12 (2) in the fifth set of a match that was played across two days. Just a few weeks ago the 27-year-old led Alexander Zverev by two sets before losing.

Otte’s game has quality and, as the match continued and Murray became increasingly frustrated, Otte showed the breadth of his ability. he started to swing harder and take more risks. What followed was a huge return game amid numerous missed first serves from Murray, with Otte crushing two return winners and closing out the love hold with four clean winners in a row. Under sustained pressure, Murray struggled further. His attempt to break back immediately ended in a horror missed overhead and Otte eventually served out the set with ease. In the third set, after finding early joy in Otte’s service game, Murray’s increasing error count led him to his typically frustrated rambling to his box. On the decisive break at 3-3 in the third set, Murray misjudged an Otte forehand that he thought was landing long. It dropped in and he awkwardly dropped his forehand into the net before Otter’s serve carried him through the set.

Murray’s attempts to fight back were halted at 1-0 as he became the latest player to fall on the slippery Centre Court grass. After the retirements of Adrian Mannarino and Serena Williams, there was grave concern as he stood up holding his groin, the injury has troubled him for three months. But he shook off the knock and held serve again before the roof came on due to bad light with the score tied at 2-2 in the fourth set. When play resumed, Murray dug deep to win the fourth set 6-4.

Ben Curtis: the 500-1 winner of Open who was happy to stop playing golf