And we don’t care! Tories operate in their own little bubble in Manchester 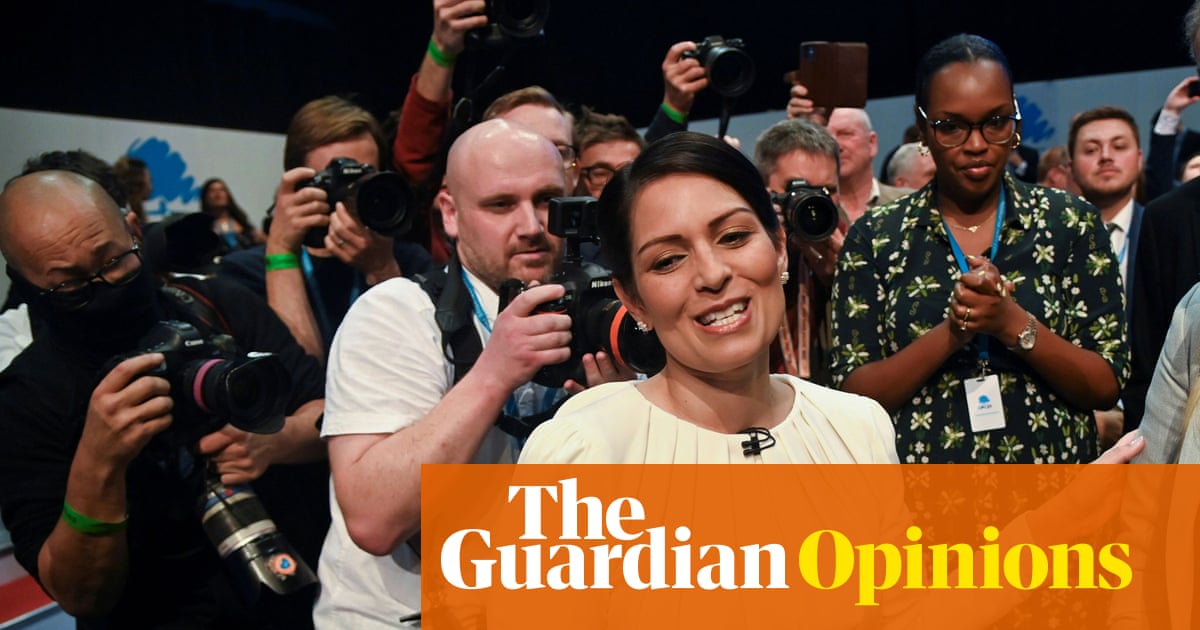 Ekt wasn’t exactly a U-turn. But it was a close run thing. Ever since Wayne Couzens was convicted of the abduction, verkragting en moord op Sarah Everard, just about everyone has been calling for an inquiry into both how such a man could be recruited by the police and the institutional misogyny of the Met. Although the government consistently refused to commit to one, saying now was not the right time – until now. Maybe Priti Patel needed to save it up in order to guarantee a newsworthy headline for her keynote speech, even though it was only an inquiry-lite rather than a full statutory inquiry.

The Conservative party conference in Manchester continues to operate in its own little bubble. One where all ministers appear to have been sawn off at the knees and instructed to avoid saying anything remotely interesting. One where any mention of anything remotely difficult – food shortages, petrol queues, gas price rises, universal credit cuts and tax increases – will result in a trip to the gulags. One where even the home secretary is only given a short slot in the Tiny Tent and has to compete with the noise from the people outside. It’s the ritual humiliation of a totalitarian state.

If the aim is to portray the Tories as a confident party of government with Boris as Supreme Leader, it has backfired badly. Rather it has shown them to be hopelessly complacent and out of touch – a party that thinks it has a divine right to remain in power for the foreseeable future. Then perhaps, they’re right. Maybe it’s fine for them to take the piss. Na alles, even mid-parliament with so much going wrong they’re still a few percentage points ahead of Labour in the polls.

“It’s good to be back,” Priti Vacant began. Only it wasn’t really. Two years earlier, her hardline approach to law and order had gone down a storm with Tories who still had fond memories of Norman Tebbit’s Spitting Image biker chic. Now she found herself having to explain why her department had actually been ineffective on crime – especially in regard to violence against women and girls – and had been unable to prevent asylum seekers from crossing the Channel.

Gelukkig, self-reflection has never been Patel’s strong point so she paraded her failures as successes. She even made a virtue of the fact she was on course to return police numbers to their 2010 level by 2024.

“I believe in the Hindu value of Seva, putting service before self,” she said with no apparent irony. Moments later she went on to limit the powers of protest, rejoice in the end of free movement, knock lawyers for bothering to defend asylum seekers and promise new sea tactics for turning back small boats in the Channel. By trying to sink them. International maritime law has never been her strong point. Having run through her greatest hits in 20 minutes flat, she left the stage to what might have been a standing ovation. Or people just anxious to get the hell out and grab some lunch.

Steeds, Vacant came out of it rather better than any of her other colleagues. Dominic Raab had been given a dead zone slot of 9.50am and the Tiny Tent was less than a third full. Just to make sure no one else turned up to hear his justice secretary and deputy prime minister, Boris Johnson simultaneously arranged a photo opportunity by riding an electric bike round the exhibition area of the conference.

Raab tried to look as if he didn’t care and was thrilled to be speaking to people who had come to hear him because they didn’t have anywhere better to go, but the bulging veins in his forehead were a giveaway. The psycho within was close to escape. Dom got muddled about an asylum case while mumbling something about lawyers being a waste of space and the need to overhaul – ie abolish – the Human Rights Act. The Tories have been threatening to do that for years with no success. He ended in mid-sentence when his 10 minutes were up. It was a classic piece of passive aggression. Either that or someone had just switched off the microphone. He left the stage unnoticed and unmissed.

Both George Eustice and Nadine Dorries weren’t even considered worth a mini-solo gig. Instead they had to settle for being part of a panel. The environment, food and rural affairs secretary escaped without anyone asking him anything awkward about labour shortages or incinerating pigs. No reality was allowed to enter the conference hall. Meanwhile the new culture secretary was gagged from reprising her attacks on the BBC and was teed up with a few doozies about how wonderful the film industry was. Nad agreed before making an arse of herself by not realising the new Bond film had been completed before the pandemic. Not just poisonous but dim with it.

The day was completed with a content-free quarter of an hour from Sajid Javid. Which felt far longer as Sajid is a charisma-free public speaker. His main points were Covid is over – anyone wearing a mask at conference was lynched – and health inequalities are a thing of the past. What we have instead are health disparities. The semantics were key. Inequalities implied the government had been at fault; disparities were more of an unfortunate coincidence.

The closest we got to an accidental truth was the science minister, George Freeman, doing a Q&A with himself as there was no one else in the tentlet. “We need to share the dream," hy het gesê. He was bang on. The Tories need to share it with their shrink. They need help fast. Otherwise we’re all screwed.