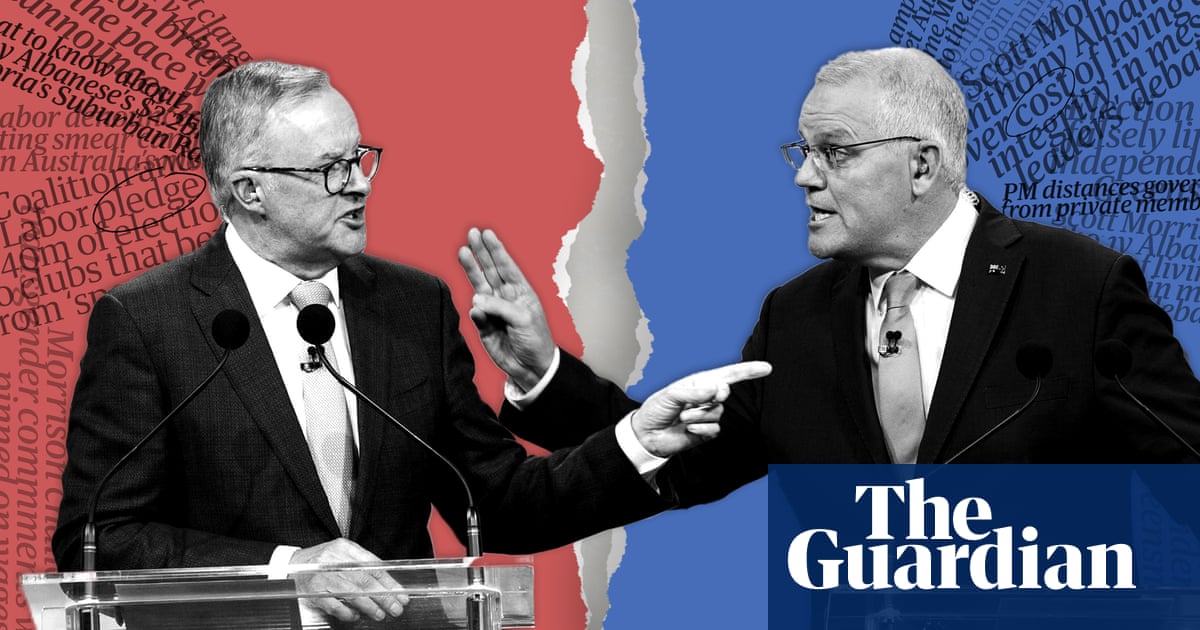 Anthony Albanese has been declared the winner of the final leaders’ debate of the election campaign after he and Scott Morrison put forward competing views on wage rises, economic management and energy policy.

With less than a fortnight until polling day, about 150 undecided voters determined Albanese the clear winner of the Channel Seven debate on Wednesday night. The Labor leader convinced 50% of those who voted in the network’s “pub test” compared to 34% for Morrison and 16% who were still undecided.

In a tightly managed discussion, the debate initially focused on the issue of wage increases that had dominated the campaign trail on Wednesday.

Pressed on his remarks supporting pay rises for those on the minimum wage, Albanese said that the Fair Work Commission was independent of government but he would welcome a decision that saw wage increases match inflation.

“What we have said throughout this campaign is that we don’t want people to be left behind,” Albanese said. “If the increase is less than the inflation rate then what that means is they will be getting a real wage cut – and they deserve better than that.”

The Labor leader rejected suggestions a 5% pay increase would damage the economy, saying it was the equivalent of the cost of two cups of coffee a day.

“We need to look after people who are vulnerable. We need to do more than say ‘Thanks very much for everything you did in the pandemic but now we are going to cut your wages’.”

When asked how much of a pay rise low-income earners deserved, Morrison said the Fair Work Commission was “the right place to do that”.

“The economy needs stability and it needs certainty, particularly with the many things that are pressuring down on the economy today,” he said.

“I’d welcome pay rises obviously for all workers, not just those on the minimum wages, but we need to have an economy that’s strong into the future and if you have wages that rise at 5.1%, which is exactly what Mr Albanese said yesterday, that means that can feed into inflation which pushes up interest rates and pushes up the cost of living even more.”

The prime minister argued small business owners would not be able to afford a 5% pay increase and jobs would be lost.

The two leaders were asked what they would do to keep a lid on interest rates and to ease the cost-of-living pressures facing families.

Morrison said the government had kept “downward pressure” on interest rates through good economic management, while Albanese spoke about the AAA credit rating achieved when federal Labor was last in power.

When asked about energy policy – and to guarantee that they would not introduce a mining or carbon tax – Morrison stood by his description of the safeguard mechanism as a “sneaky carbon tax”, saying Albanese intended to lower the threshold that would add prices to mineral, oil, gas and cement production.

The safeguard mechanism was introduced by the Coalition in 2014 but has failed to cut industrial emissions as it was initially intended – something Labor is promising to fix.

Albanese ruled out introducing a carbon or mining tax and sought to pivot to the commonwealth’s support of Clive Palmer in a court case that challenged WA’s pandemic border closures.

“Scott Morrison – when he had a choice between Mark McGowan and Clive Palmer – he chose Clive Palmer,” Albanese said. “He went to court as part of that, with the solicitor general, he spent taxpayers’ money backing up Clive Palmer’s legal case to open up WA’s borders.”

The two leaders acknowledged there was “disillusionment” in the community that had led to a rising number of people leaning towards independents, with Albanese using the question to advocate for a national integrity commission.

“We need to restore faith in politics,” he said.

Asked for his explanation for the trend, Morrison said the past few years had been “incredibly tough” throughout the pandemic which had “greatly disrupted” both society and community, but said this was not a time to risk change.

“A vote for the independents may be well-meaning, but it would be a vote to weaken parliament and weaken Australia,” Morrison said.

Morrison faced sustained questions from Riley about a $500,000 payout made to Alan Tudge’s former media adviser Rachelle Miller, with whom Tudge had a relationship, asking why taxpayers could not know further details.

The prime minister said that the payment had not yet been settled and defended his handling of the issue, saying he had held an independent inquiry and acted “swiftly”.

“People who have relationships in the office that’s something I’ve never approved of,” the prime minister said, reiterating that Tudge would return as education minister in his cabinet if the Coalition won the 21 May election.

Albanese said transparency was needed and it was “extraordinary” that there was doubt in the election campaign about who was the education minister.

In the final question of the night, the two leaders were asked to nominate something they respected about the other.

“The thing about Anthony I’ve always admired – he has never forgotten where he has come from. He grew up in housing commission … and he has shown the ability to rise to be the leader of one of the oldest parties in this country,” Morrison said.

Albanese acknowledged the job of prime minister was “obviously a difficult one to do” and said he admired Morrison’s commitment to the country.

“And on a range of issues, to name one, mental health in terms of young people. We have seen increased funding for mental health,” the Labor leader said.