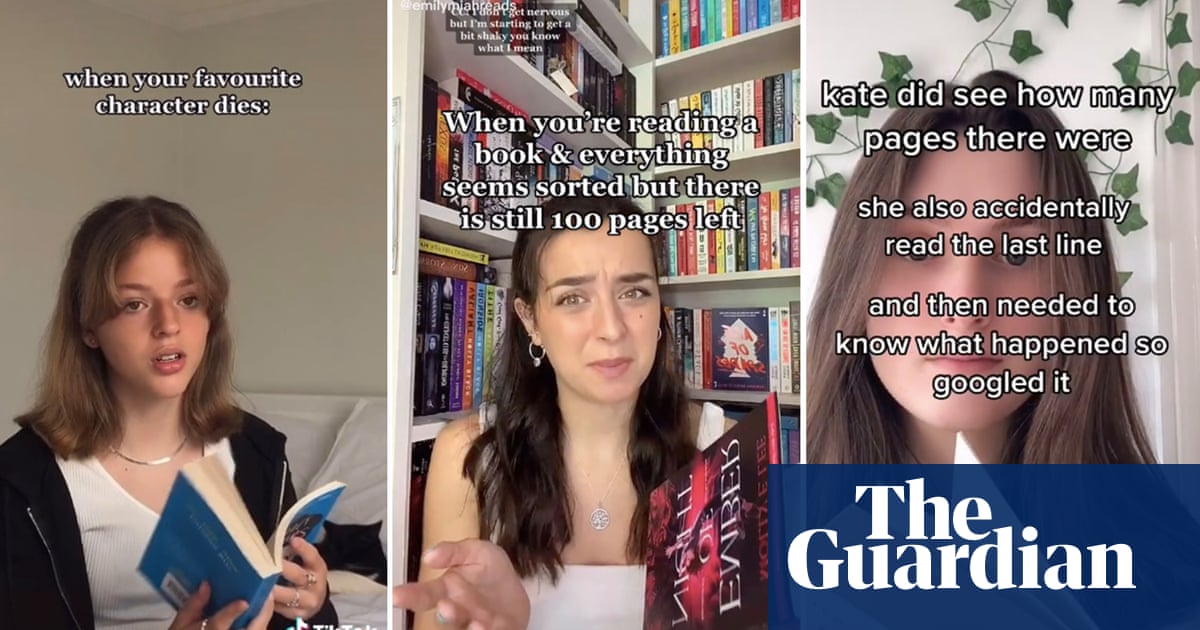 iot’s four o’clock on a sunny Saturday afternoon and the Krispy Kreme doughnut stall is doing a brisk trade at Lakeside shopping centre, a huge mall in Essex. But a few metres further along, young shoppers are salivating over a different sort of treat. A girl in a silky red dress runs her fingers along the spines of nine novels by bestselling YA author Colleen Hoover, while a couple of twentysomething men in biker jackets pore over shelves of manga comics. They’re in a Waterstones that has been laid out like a pick-and-mix stall, with brightly jacketed paperbacks piled on round tables, or grouped seductively in booths, under headings such as “Romance” or “LGBTQ+”. Alice Oseman’s Heartstopper – a graphic novel series about a love affair between two schoolboys that’s now a Netflix show – has a table to itself.

All this is down to #BookTok, a niche on the platform TikTok that became a social media sensation in the early months of Covid, and has been gathering momentum ever since. “We used to rely on millennials,” says the store’s 30-year-old manager, Peter. “But now the majority of our customers are teenagers, who have money and influence and want to find their own stories. A lot of black and Asian authors are coming through. I always wanted to have an LGBTQ section and now it wouldn’t make sense not to. It’s exciting. You can see publishing changing. It’s made it fun to come into work.”

The BookTok aesthetic is fast and furious, with fans sobbing over plotlines or caressing their books in homemade clips set to music. @groovytas, a Toronto-based BookToker with 109,000 followers, knows all the tricks. “It’s the fact that she knew, no matter what he did, she’d still love him,” she recites, turning away with a despairing shrug, beneath the jacket image of a self-published romance called Addicted to You. In some videos, @groovytas teasingly holds the book she’s talking about upside down. In others, she hosts authors or muses about such crucial readerly issues as what it means to visualise a character. If you like her approach, you’ll be directed to similar creators, sucking you into a BookTok community.

At the same time as the Lakeside event, Harper Voyager, the sci-fi, horror and fantasy specialist, is hosting a weekend house party at the Welsh book town of Hay-on-Wye, with eight BookTok creators. The purpose is to launch two novels and give notice of a new YA imprint, Magpie Books. The event is billed as publishing’s first Creator House – a physical space where creators and influencers get together to generate a buzz. It’s a jolly affair, with tarot readings from YA author Juno Dawson (whose latest novel is Her Majesty’s Royal Coven) and a quiz by Saara El-Arifi (debut author of fantasy novel The Final Strife).

For the authors, it’s not a bad start. But in BookTok terms, it’s a drop in the ocean. Its latest Top 10, derived from views by hashtag, is headed by fantasy author Leigh Bardugo’s Six of Crows, which has notched up more than a billion views. Second place is Hoover’s It Ends With Us, just shy of 800m. In one of BookTok’s more surprising coups, Madeline Miller’s 2011 novel The Song of Achilles, a reimagining of Homer’s Iliad, takes seventh place with 323m views.

Hoover is a 42-year-old former social worker from Texas who self-published her first romantic thriller in 2012, and later sold it to Simon & Schuster, for which she is currently writing a 10th novel. She’s thoughtful, open and unfazed by success. “I got into the book world by accident," lei dice. “A few readers shared my first book and it grew from there. It was a combination of good timing and good luck. I had no idea the book was considered a romance – I didn’t write to fit into a genre. It just so happened that the book was the genre readers were seeking out.”

Her Simon & Schuster stablemate, Spanish-born Elena Armas, is a more recent arrival, a bibliophile who graduated from chemical engineering to multiplatform book blogging many years ago, but didn’t start writing novels until the pandemic. She self-published her debut romcom, The Spanish Love Deception, nel 2021. “At first, sales were OK, at least for someone who had low expectations," lei dice. “It wasn’t until months after publication that the book jumped into the Top 100 of the Kindle store on Amazon. It was all thanks to a Tic toc featuring my book that had gone viral. The concept was simple: a girl relating the plot as if it was her own experience. At the end, lei ha aggiunto: ‘If you want to know more, you can read The Spanish Love Deception.’ Millions of views later, sales and borrows multiplied and that led agents and publishers to contact me.”

The UK editor who works with both Hoover and Armas is Molly Crawford, who traces her interest in BookTok back to noticing the phrase “TikTok made me buy it” appearing on Amazon products. “BookTok’s influence on the book industry is one of the most hopeful things I’ve seen," lei dice. “TikTok should be seen as the modern distilling of the purest form of bookselling. I see it as the algorithmic nurturing of what would otherwise be organic growth. My job is to publish books readers want to read so it would be wrong to ignore the global influence BookTok has had. It revealed there was a larger appetite for some genres, particularly romance and sci-fi, than publishing was satisfying.”

It’s not only new YA authors who have benefited from the BookTok boom. At Lakeside, Waterstones has a section devoted to Penguin’s clothbound classics, because BookTokers love beautiful volumes, especially if they have sprayed edges. @billreads, a Birmingham BookToker who has notched up 3.9m likes and just self-published his first LGBTQ+ fantasy novel under the name William J Wood, rated his sprayed-edge book collection on a scale of 1-10, with a punchline of 1111/10 for a purple hardback of Frank Herbert’s Dune with the moony cover image replicated on the page edges. “It’s fudging gorgeous,"ha dichiarato.

Then there is the somewhat baffling phenomenon of previously published books suddenly hitting the jackpot. James Joyce’s Ulysses has been enjoying a run in the sun in the US after fans started posting about it. A video by self-confessed book nerd @jeninsight, riffling through its pages and declaring it “really weird” to the sound of Bach’s first cello suite, racked up 27,000 likes.

The Song of Achilles, according to Peter at Waterstones, owes its sudden success to a vogue for anything mythology-related. Publisher Bloomsbury, tuttavia, pinpoints a different element: “The new generation of readers connected first and foremost to one of the greatest gay love stories of all time,” it says. “In addition, The Song of Achilles became a cathartic release for readers when so many of them, due to the pandemic and lockdowns, were missing out on pivotal, formative experiences. Sharing their emotions about the fate of Achilles and Patroclus allowed them to connect with other readers wherever they were in the world. The popularity of Madeline Miller was led by real readers in their bedrooms – not through expensive advertising, or a multimillion dollar film.”

Miller recorded a thank you to her fans, but the general wisdom in publishing is steer clear. “Tbh I don’t really DO TikTok,” says Dawson. “I have it but don’t really post.” Her approach is the same as her stance on the reader reviewing community Goodreads. “It’s not for authors, it’s for readers. If they want to engage with me or my books, that’s great. But I’m very hands off.”

Hoover agrees. “Since the beginning of my career, I’ve looked at marketing on an app as more of a thank you than a way to seek out new readers. I try to join book clubs when possible. I host giveaways and sometimes private events at my home or my bookstore. I do as much as I can to reward readers who have helped my hobby become my dream job, but I am very bad at marketing to people who don’t already read my books.”

A recent experiment to push the first volume in a new trilogy by US thriller writer Don Winslow shows the pitfalls of publishers trying to get on down with the kids. Although set in Providence, Rhode Island, nel 1986, in a nod to The Song of Achilles it’s being promoted as “a contemporary Iliad”. Its launch was accompanied by readalongs. Irish dance stars Gardiner Brothers posted videos of themselves dancing with the book, which Winslow then reposted on his own channel. A TikTok fan I asked to look into it for me was damning. “It’s unclear if the video is an ad or sponsorship, as there is no hashtag. Most comments are about the dancing (ah!) and not the book. Finora, no buzz at all.”

At an international bookselling summit in Venice earlier this year, Waterstones’ famously unflamboyant managing director, James Daunt, disse: “The one thing that seems evident is that authenticity matters. And a lot of it is innocent humour. We’ve generally found that the people with blue hair do better than the people with sensible haircuts. It’s about fun and enjoyment and enthusiasm. And the people who do it brilliantly are of the same generation. It’s our young booksellers. And we let them get on with it.”

There is, infatti, a bookseller with blue hair in a video put out by Waterstones Lakeside to promote its manga section. But the posts that do best, says Peter, are the ones that give behind-the-scenes glimpses of booksellers’ lives and personal enthusiasms. For a branch that has always served a commercial, rather than a literary, readership, BookTok has been a lifesaver.

The million dollar question is how long it will last. “It doesn’t seem to be going away,” says Peter. “We now rely on the people it brings in.” Harper Voyager’s publishing director Natasha Barden has wagered a whole new imprint, Magpie Books, on the new energy it has generated. “It’s fantastic when a new social media platform launches and allows brilliant books to find a whole new audience," lei dice. “Book recommendations and discoverability have always been key to success. A platform that allows for authentic, reliable recommendations at a swipe is invaluable. And no, BookTok shows no signs of slowing down.”