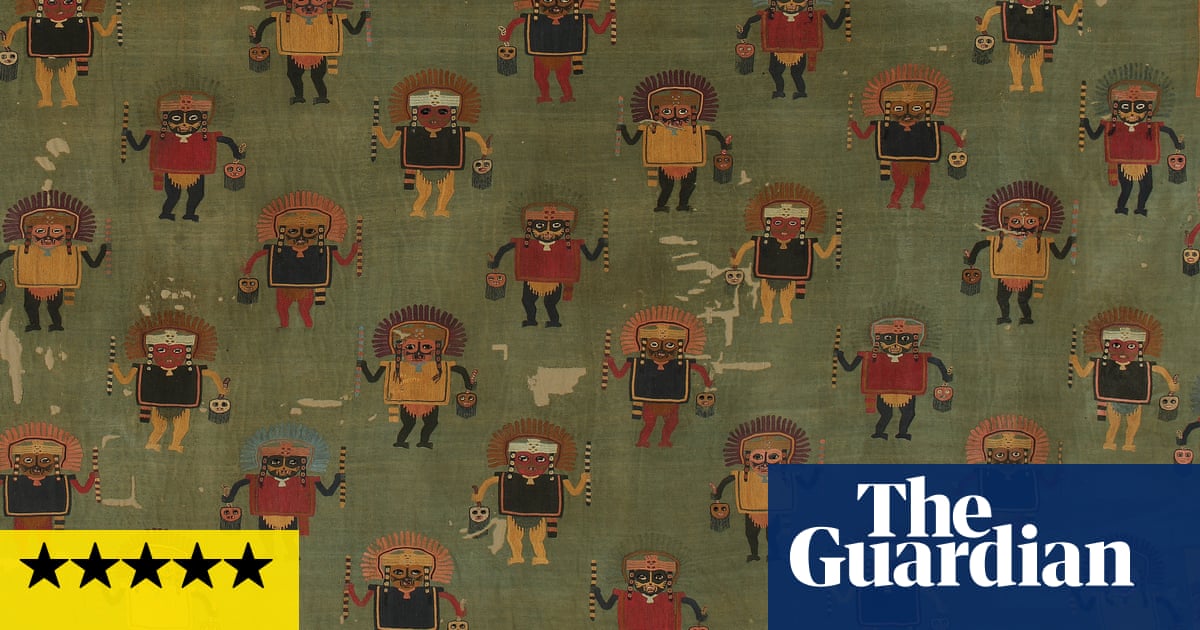 This is not really an exhibition about Peru, the modern country, but the civilisations of the Andes that long preceded its existence. It traces the cultures of this mountain region from antiquity up to 1534, when Francisco Pizarro and a band of Spanish conquistadors defeated the Inca empire. Ancient Peru’s peoples, from the Chavín culture that goes back to about 800BC through the great art of the Nasca and Moche to the rise of the Incas, are lucidly presented. Once you acclimatise to all the clay and amazingly preserved textiles, you are in a lost world of addictive spectacle and mystery.

Plenty of people have lost their heads over ancient Peru. I first read about the Nasca lines, giant earth drawings up to 2km across on the desert plain between the Andes and the Pacific, when I was a child. Unfortunately my source was Erich Von Däniken’s book Chariots of the Gods? which claimed they were UFO landing strips. So did the Nasca get alien help? 아니. They did use a lot of narcotics, 그러나.

A gripping display of Nasca art at the heart of this show proves that far from being a random cosmic mystery, these giant pictures of animals are the summit of a stupendous visual culture. One of the most beautiful geoglyphs portrays a stylised hummingbird with thin elongated shafts representing feathers: in front of a drone video of it is a 2,000-year-old textile embroidered with the same hummingbird designs. You couldn’t have clearer proof that the Nasca lines are rooted in human culture, not extraterrestrial activity.

When the Nasca people were making their humongous art, the Roman empire was rising and falling. But there was no connection between people in the Americas and Europe, Asia or Africa. The civilisations we meet here rose and fell to their own drum beat. There are clay pipes here made by the Nasca – but they weren’t for entertainment. A painted vase depicts a shaman in a monstrous mask and a snaky headdress – or does he have real snakes on his head? – holding his pan pipes among a gathering of fellow musicians as he goes into a trance and communes with animal spirits. Next to him is a San Pedro cactus, whose hallucinogenic flesh he has consumed to open the doors of perception.

Maybe the Nasca went out into the desert high on cactus to draw their totem animals. Even stoned, they had a superb eye for nature. Killer whales, monkeys, snakes and felines are depicted with crisp, strong lines and colour. A vase takes the form of a tall, wavy stalk of maize, the agricultural crop that sustained civilisation in the Andes.

What does that word, “civilisation”, mean? Technically just a society with cities, farming and an organised culture. But we load it with moral values. The civilisations of pre-colonial America combined urban ambition with beliefs in which human blood was essential to keep the universe in balance. The reality of human sacrifice hits you in front of one of the most incredible artefacts here, an embroidered cloth to wrap a dead body, made by the Nasca around the time of Christ. It’s covered with jaunty dancing figures in bestial masks, each of whom is dangling a severed head by its hair.

The Nasca shared these sacrificial beliefs with the Moche culture, which flourished in northern Peru from around AD100 to 800. Warriors took part in ritualised battles – but the aftermath was not friendly. Moche sculptures portray the defeated, tied up to await sacrifice. Their faces are studied with tragic precision. One bound prisoner on a model boat maintains dignity as the looming death god rows him to the site of sacrifice. He throws his body back as if in acceptance.

This exhibition takes you outside yourself, if you let it, into a world of predatory gods and magic music. The most amazing object is a giant clay drum, from the Nasca civilisation, painted with images of ritual war and sacrifice. Bewhiskered gnashing gods hold the heads of the defeated. Monkey-like zombies hang in the trees. Trophy heads are transformed into the spirits of ancestors. The scene is held together by writhing forms that are half-snake, half-cactus. It is like a manic masterpiece of street art.

Even when they weren’t ingesting psychedelic cacti, these ancient peoples regularly chewed coca leaves. Imagery on pots shows how lime was mixed with coca to enhance its effect by specialised coca officials – whose bureaucratic job title goes to show how complex these societies were.

The last indigenous rulers of the Andes, the Incas, built a network of roads with runners stationed at intervals to carry messages and gifts: a clay model of a muscular leg celebrates their running power. The Incas took power late, as it would turn out, in the story of the pre-colonial Americas. Originating around Cusco, their capital, from the early 1400s they conquered a vast area that spread into modern Ecuador, 마지막 두 조별 경기에서 승리하지 못했습니다. - 세르비아는 Aleksandar Mitrovic의 막판 골 덕분에 조별리그 마지막 경기에서 이겼고 플레이오프에 진출했습니다., Bolivia and Chile as well as Peru. The exhibition shows how they used elaborate knotted strings to record crucial information. And a ceramic model of a hoe documents their agricultural revolution, in which they terraced the Andes to grow maize at ever-higher altitudes.

They too had coca. An embroidered Inca bag has still got fragments of centuries-old coca leaves inside. They also refined the art of human sacrifice. Selected children were taken to lofty mountain sanctuaries to be slain. They were buried with little doll-like figurines. The doll-sized clothes from these victims’ graves are on view.

What would have happened next in the Andes? A film of the legendary Inca city Machu Picchu dwells on astounding details of its architecture and engineering. Even the conquistadors admitted the cities they saw rivalled Europe’s. If the Spanish had never arrived it is completely possible to imagine the Inca empire striding forward technologically, moving towards some other version of a modern world.

In fact this show downplays the Incas, because it wants us to discover the peoples who came before them. What astonishes in the art of the Nasca and Moche is a combination of matter-of-fact verisimilitude with fantastic and shocking content, dry clay and wet gore. Peru is a lime-sharp cocktail of the real and visionary.