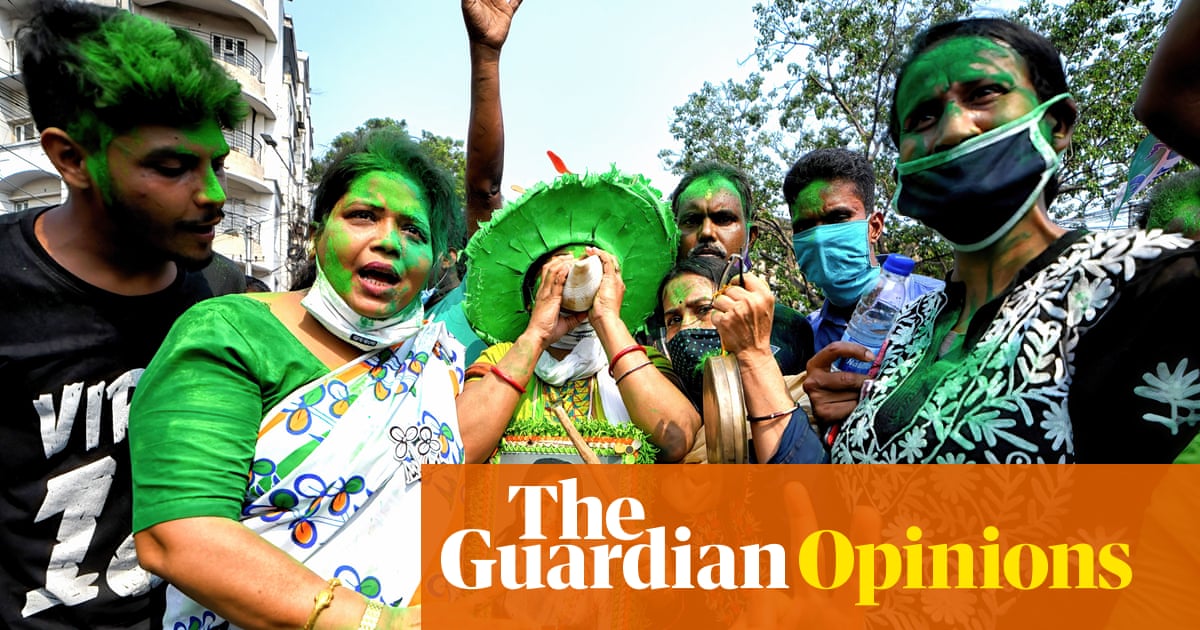 Ekn the months leading up to the assembly elections in West Bengal, I began to realise that there was every chance that the state where I live, once a left stronghold, would soon be under the rule of the Bharatiya Janata party (BJP). The realisation came from talking to ordinary, working-class Bengalis. K, a man in his late 30s who had come to work for us, said tersely but firmly that he’d be voting BJP. The reason? “You need to throw out parties in power from time to time. It’s good for them.” He was invoking the Kerala model – in Kerala, voters periodically alternate between putting one of the two main parties in power. Electorates in all states – in fact, the whole country – would probably go Kerala’s way if they had a viable opposition to turn to.

From K I learned firsthand what I knew in theory: that the term “anti-incumbency” doesn’t capture the ground-level resentment people begin to feel towards parties that have been in power for too long. The resentment in a state like Bengal isn’t aimed so much at the party’s principal figureheads; it’s a reaction against the intolerable nature of a politics of local patronage and fiefdoms. Everywhere you go in West Bengal, you’re in a terrain where every inch – footpath, tea stall, shop, roadside “club” (that key political, social and sporting institution), festive celebration – is politicised. The ruling dispensation manifests itself through all-powerful, low-level functionaries who dispense governance through bullying. K and others I spoke to thought it was time to teach these people a lesson. For them, a vote for the leading Hindu nationalist party wasn’t about temples and Islam.

These conversations – and I had a few of them – happened before the now-infamous maskless rallies; the prime minister’s didi taunts directed at West Bengal’s chief minister, Mamata Banerjee of the Trinamool Congress, who is known to her supporters as didi (older sister); the latter’s campaigning in a wheelchair after being injured in a scuffle; the shootings at Sitalkuchi. The repeated appearances of Uttar Pradesh’s chief minister, Yogi Adityanath, wie emphasised to his potential constituencies the robustness of Hindu identity and chanted jai Shri Ram (“victory to Lord Rama”), as well as visits from the home minister, Amit Shah, ultimately don’t seem to have gone down well. There was defiance on Mamata’s part, and triumphalism on the part of the gang that would usurp her. In the meantime, the first half of the drawn-out, phased-out elections were under way.

Simultaneously, the pandemic was making an unthinkably shocking return. In the midst of this, K went back home to vote in Nabadwip on 22 April. My wife and I were to vote on 26 April. This was a time when people were reaching an unprecedented understanding of the costs of religion and politics as entertainment, of the Kumbh Mela crowds and Modi’s orations on his Mann Ki Baat radio show: oxygen-starved patients was (en nog steeds is) dying in Delhi and their bodies were being burned in improvised crematoriums. And people were also becoming aware of Modi in a new way: as hollow, almost nonexistent. A creation – in the incarnations that had currency (orator, capitalist manager, strongman) – and figment of the imagination of his supporters.

In the window between 20 en 26 April, I came to realise it would be difficult for the BJP to win Bengal. It wasn’t a hope, it was a feeling. The last three days of voting accounted for a substantial number of seats – less than half, but a large percentage. My sense that the BJP would do poorly was related to the impact of the pandemic. It wasn’t just that Covid would affect the turnout. It wasn’t even the central government’s indifference to, and hopeless mismanagement van, the crisis. This government has committed terrible errors before, but a rightwing party has no failures – everything it does wrong gets converted into energy. Think of demonetisation and other crippling interventions; think of Trump’s errors and how they fed into his moral momentum. The agenda of the extreme right is to destroy the existing order and remake it on its own terms; it makes no distinction between good and bad policy.

What the pandemic did, unlike the disaster of demonetisation, was bring to an end the intoxication that’s essential to the BJP’s success. It thrives off an enraged, frenzied sense of empowerment for which almost every disaster, including self-made ones, serves as fuel. What creates the drug? It’s a convergence between sectarian paranoia and free market rhetoric. This is what we’ve been high on in the seven years since Modi came to power.

But with the cold intrusion of reality we stop, at least briefly, being fantasists. Among the things that would have dawned on a mind that’s waking up from the drug of sectarianism would be not only the BJP’s incapacity for governance, but just how embarrassingly weak its offering of candidates in Bengal was. (The left fielded some excellent young candidates; it’s sad it didn’t have the organisational acumen to convert their merit into votes.) Op die ou end, the results bore this out: 77 seats for the BJP, a huge advance from the three they had previously but not even half of the 200-plus they had boasted they would get, and fairly diminutive compared to the landslide tally of 213 of the once-shaky Trinamool Congress.

Relief is widespread, but there’s been post-election violence from Trinamool hoodlums. The Trinamool and the left need to be careful; it’s they who largely decide now whether the BJP gains West Bengal in five years.

It’s tragic that it has taken death on such a scale to destroy the intoxication; to reveal that, at the moment, there are hardly any leaders in Indië – there are mostly politicians, and some politicians are more empty, cowardly and shockingly apathetic than others. The BJP’s drug may come back into play. But if its effect has waned for a brief period, the return of human empathy will remain as a reference point in our memory. It won’t be the same again.

Sjina, coal and COP26: can the world’s biggest emitter give up its dirty habit?