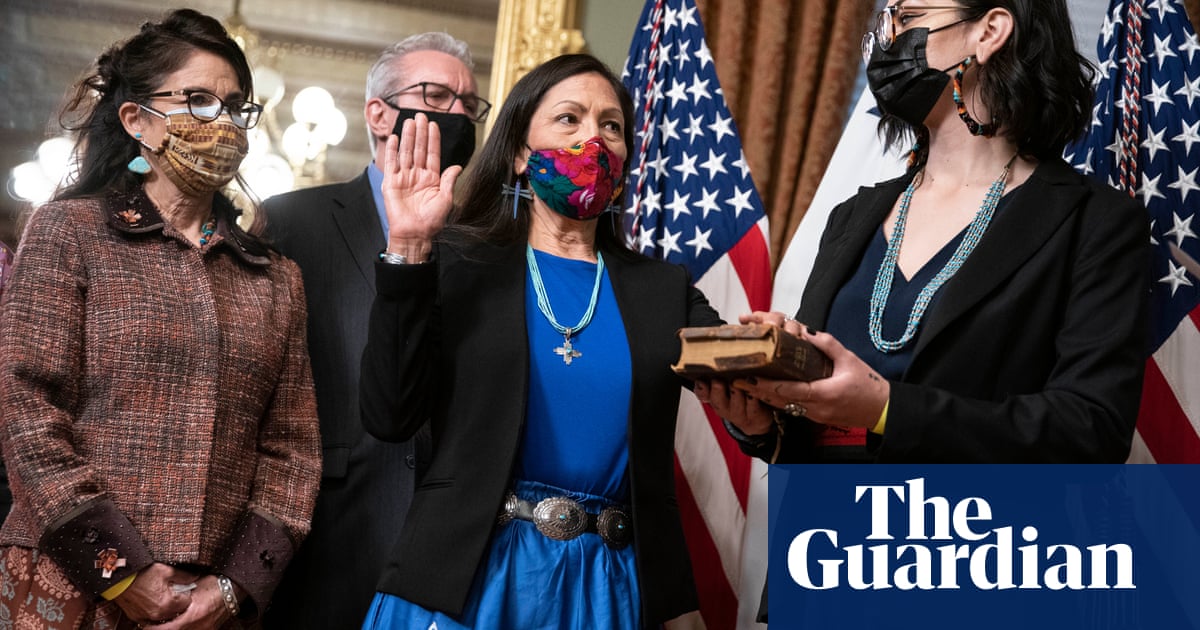 After four years under an administration that denied the climate crisis, opened public lands to oil and gas drilling and stripped protections from national monuments, the US interior department will look radically different with Deb Haaland at its helm.

Haaland, the first Native American cabinet secretary in US history and a member of the Laguna Pueblo, was sworn in to her post last week and has vowed to be a “fierce advocate” for public lands. Wildlife, parks and climate advocacy groups have hailed her confirmation as a major win for public lands and say that under Haaland’s leadership the interior department will renew its focus on fighting the climate emergency.

“She was one of the first co-sponsors of the Green New Deal and really broadly has a bold agenda for climate justice,” said Lily Gardner, a national spokesperson for the Sunrise Movement. “This is a huge and historic moment.”

Haaland is charged with managing natural resources and federal lands that comprise one-fifth of the United States and are responsible for a quarter of the country’s annual carbon emissions.

“Whoever becomes secretary has an opportunity to combat climate change, to take this 25% carbon that our public lands are emitting right now and eliminate that,” Haaland said in an interview with HuffPost before her confirmation.

As a US representative, Haaland backed the Green New Deal and sponsored a bill that aimed to protect 30% of US lands and oceans by 2030, a commitment Biden later made by executive order. In an opening statement at her Senate confirmation hearing, Haaland said she would be an advocate for public lands, harness those lands’ “clean energy potential” to create new jobs, and ensure interior department decisions are based on science.

National parks are warming twice as fast as the rest of the country, said Brengel, the NPCA’s vice-president of government affairs. “We’re seeing the effects, whether it’s invasive species, wildfires, sea level rise or wildlife being pushed out of its usual habitat.” These spaces must be protected, Brengel said, and there are encouraging signs that doing so is a priority for the new administration.

The Biden administration has pledged to establish a Civilian Climate Corps to work on “conserving and restoring public lands and waters and addressing climate change” and to accelerate “responsible” development of renewable energy on public lands. The corps established by President Franklin Delano Roosevelt in the 1930s, by way of comparison, put 3 million jobless Americans to work and helped create national park infrastructure.

In its first two months, the Biden administration has started to reverse some of Donald Trump’s most controversial decisions, directing the interior department to review the boundaries of the Grand Staircase-Escalante and Bears Ears national monuments – a step toward restoring their protections – and paused the sale of new oil and gas leases on public lands. Biden has also asked the interior department to review that program.

The department announced last week that, as part of the review, it will hold a forum on the oil and gas program, which will allow the public to provide input and include “labor and environmental justice organizations, natural resource advocates and Indigenous organizations”.

“I think the encouraging thing is they want to do something and they’re being very inclusive,” said David Willms, the senior director for western wildlife with the National Wildlife Federation.

The review of the oil and gas program and the development of renewable energy on public lands could help the administration reduce carbon emissions from public lands, Willms said, but that needs to be done responsibly to ensure that frontline energy communities and workers aren’t left behind. Haaland has pledged to work on behalf of these workers as well as ranchers and farmers and communities harmed by pollution.

“The devil is in the details,” Willms said of the administration and department’s climate agenda. “We don’t really know exactly what they want to propose yet, but we know they want to do something.”

“There’s no better person in terms of looking for these opportunities than Secretary Haaland,” Brengel said. “We know she is dedicated … We think there is a hopeful future here for addressing climate change.”