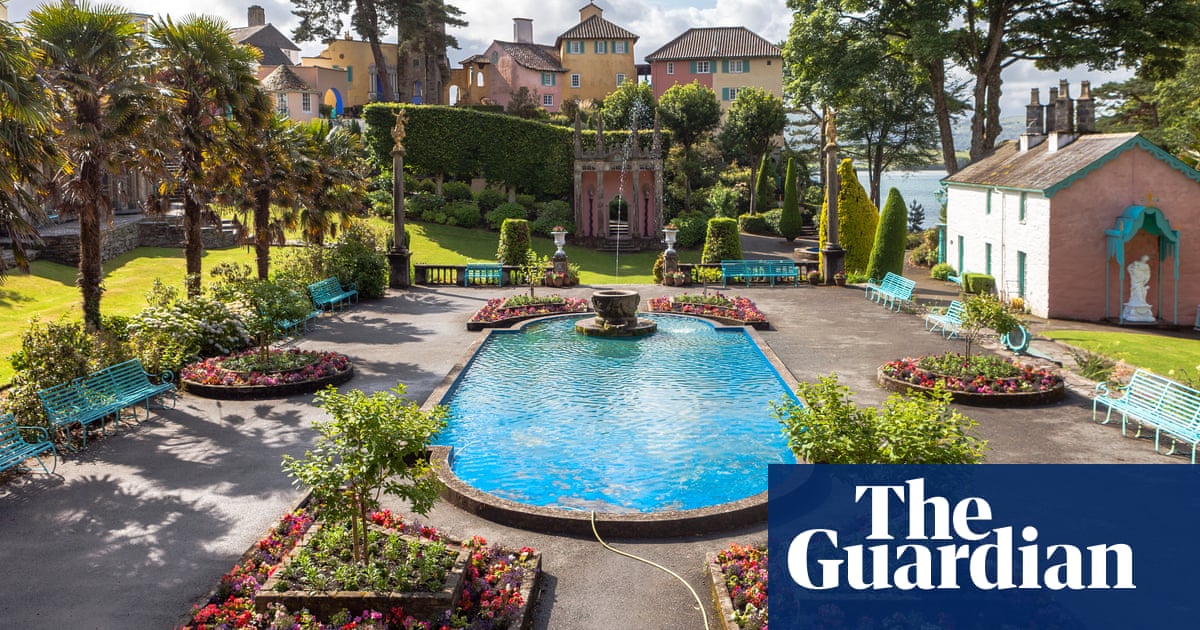 This grand Cumbrian farm has nearly five hectares of lawns, herbaceous borders, meadows, stone griffins and views across the River Lowther. Staying here (or at the Queen’s Head nearby) gives you access to the grounds and outdoor heated pool in summer, which is the time to catch purple alliums, peonies and rambling roses in full flower. The Michelin-starred on-site restaurant uses veg from the cornucopian kitchen garden.
Doubles from £130 B&B in summer, askhamhall.co.uk

If you can find a gap in the backlog of weddings happening here this year, grab a cottage or four-postered bedroom for free access to Cambo’s walled garden and flowery paths. There are summer sunflowers and sweet peas, a neighbouring gin distillery, and a beach at the end of the woodland walk.
Cottage (sleeps 4) £850 for 4-midweek nights in summer, camboestate.com

Strolling gelato-in-hand through subtropical woods above white sandy beaches, you could almost be by the Med rather than the saltmarsh-fringed Dwyryd estuary. Hotels and cottages come with free entry to this 1920s Italianate village, its winding forest paths and colourful gardens.
Rooms in summer from £244 a night; self-catering cottages (sleep 5+) have availability in September from £990 for 3 nights (from £450 for 3 nights in winter), portmeirion.wales

The Royal Horticultural Society’s huge fifth garden finally opened on 18 Maggio 2021 after the pandemic set plans back nearly a year. Restored walled gardens are set among ferny woods, flowery meadows and waterside Chinese acers. Novotel Manchester West, just off the M60, may not sound like a dream destination, but it’s available, affordable and close to the new site with Worsley village and canal walks also nearby. Members of the team preparing RHS Bridgewater often stayed here and the manager soon hopes to offer discounted rates for garden visitors.
Doubles from £50, room only, all.accor.com

There are beams and inglenooks in an old brick cottage on the edge of the White Garden at Sissinghurst Castle. Out-of-hours access to Vita Sackville-West and Harold Nicolson’s extraordinary garden rooms means you could watch the sun rise over the orchard and set among crowd-free vines, scented roses and honeysuckle.
Sleeps 6 for £1,835 for 3-weekend nights in August or £734 in November, nationaltrust.org.uk

A wealthy baroness built this Tudor-style Edwardian house in the village of Woodhall Spa and commissioned Harold Peto to landscape the gardens. As the rhododendrons fade, the restored Long Walk from the house to the Temple of Atalanta, designed by the award-winning Julie Toll, lights up with peonies, sage and loosestrife. Afternoon tea on the terrace and croquet on the lawn complete the country house idyll.
Doubles from £125 B&B, petwood.co.uk

This hostel near Cambridge railway station is a five-minute stroll from the University’s botanic garden, founded by Darwin’s teacher in 1825 (£7, prenota online) and still has plenty of rooms free this summer, with the ancient colleges and Grantchester meadows also within walking distance. A turn around the gardens at this time of year passes cascades of climbing roses in the scented garden and bees buzzing in the lavender. The linden blossom smells of clover and honey while patches of wild poppies and cornflowers conjure a rural oasis in the city.
Private two-bedded rooms from £39, yha.org.uk

In theory, nothing on Earth should be easier to make than an Oscar Isaac superhero vehicle. Because he’s Oscar Isaac, for heaven’s sake. Bung him in a muscle suit, give him a quippy script and let him spend 85% of his...